Hero Kids is a ENnie award-winning fantasy RPG for kids aged from 4 to 10.   This game offers a fast and fun introduction to RPGs, perfect for younger kids who are just getting interested in role-playing games.   The game is for sale as a downloadable print and play PDF from DriveThruRPG. Hero Kids has a simple combat and adventuring system which avoids the complex math of full-blown systems.   Hero Kids' opposed dice pool system also keeps the players involved in the game even when it's not their turn.

The combat and adventuring mechanics in Hero Kids are based on six-sided dice, so you don't need to find any unusual dice to play! 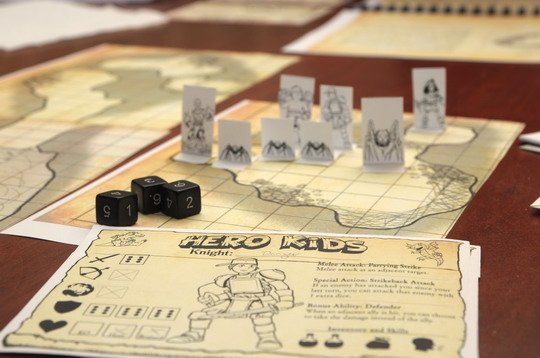 The core game comes in a 53-page PDF and includes all of the rules and play instructions, as well as 10 heroes for the kids to play, plus a set of 8 basic monsters (and all of the separate adventures come with additional monsters).   The game includes male and female heroes, including Warriors, Hunters, and Warlocks as well as unique heroes like the Rogue, Brute, Healer, and Knight.   All of the heroes and monsters also come with printable stand-up minis to use in combat encounters.

Additionally, the basic game includes the 19-page introductory adventure 'Basement O Rats', which comes with an extra monster and five illustrated printable encounter maps.   Can the kids rescue their friend Roger from the unusually large rats that have overrun the tavern basement?

Hero Kids has undergone and extensive development and playtesting to ensure the game is as simple, addictive, and engaging as possible.   But don't believe me, listen to the actual players:

"The game was great, we were off and playing within a few minutes of reading the rules!"